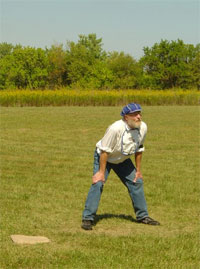 In vintage base ball, 1860s variety, winning is secondary. Having fun is most important. The Rock Springs Ground Squirrels Vintage Base Ball Club is an educational program of the Macon County Conservation District founded in 1993. In case you’re wondering, it was called “base ball” – two words – in the 1860s.

Vintage base ball has attracted both men and women for its slower pace, unique rules, showmanship, civility and good sportsmanship – so lacking in today’s sports venues. It’s all about friendship and having fun and showing people how baseball was played away back when. Museums, historic sites and park districts sponsor most of the clubs in the United States. For many years, the Ground Squirrels were the only vintage base ball club in the state of Illinois. Recently, three other vintage clubs have been established in the state.

The Ground Squirrels club commonly plays by the rules of 1858, although it switches to the rule of 1860 a few weeks before the Ohio Cup and then returns to the 1858 guidelines for the remainder of the season, including the Stephen A. Douglas Cup Vintage Base Ball Tournament.

The friendly confines of BeautifulTrobaughField have hosted the team nine’s home games and the field is perhaps one of the truest representations of an 1860-era field in the modern game of vintage base ball. The field, by the way, takes its name from founder, Lee Slider’s alter ego, Joseph Trobaugh, proprietor of Homestead Prairie Farm, a National Register of Historic Places site located just a short walk from the ball field.

There are noticeable differences in how the game is played. For instance:

Source: Nuts about the game, The Rock Springs Ground Squirrels play the old-fashioned way. Just for the fun of it. Herald & Review, Decatur, IL.

Watch a Video of the Rock Springs Ground Squirrels

A group of base ball players in Macon County is preserving the old days of base ball. The Rock Springs Ground Squirrels play the game by 1860s rules, which dont allow swearing or gloves. Producer Julius Bolton takes viewers to the Macon County Conservation District to enjoy a bygone era from our national pastime.

Video from Prairie Fire on WILL-TV.