A History of Rock Spring Water Company and the Bottling Plant 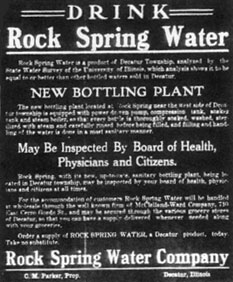 Rock Spring probably got its name from the large overhanging rock that early visitors saw above the spring’s basin. It is near the site of the Macon County’s earliest grist mills built in the 1830’s. This area was a popular location for picnics and parties for many years until it was fenced in by land owners in the late 1800s. Also, poor roads and no bridge over the nearby Sangamon River made it harder to reach in those years.

Born in North Carolina in 1860, Charles Parker and his family moved to Christian County, Illinois in 1867. Attending school until age 18, he first taught school in Christian County in 1879 and attended Westfield College in 1880. From 1881 to 1886, Parker taught at the Old Blue Mound School in Macon County. He returned to Taylorville to teach at West Side School until he resigned in 1888.

In 1887, Parker started an educational publishing business which lasted for over 25 years. Among the many titles he published were “Illinois State Course of Study”, “School News and Practical Educator” (a monthly journal for teachers), and “Penny Classics” (a series of small reading books for elementary school students). From 1888 to 1897, Parker was an instructor at various Illinois’ teachers’ institutes and traveled as a guest lecturer. Over the years, he served on numerous boards in Taylorville such as the library, the high school, a bank and others.

In 1907, Charles M. Parker bought the 80-acre “Rock Spring Farm”, which contained the spring. He built a house on the farm but it is not known if he became a full-time resident at his farm.

In 1915, Parker began to make plans to start a business called the Rock Spring Water Company at the site of the spring to bottle and sell the water. He had a concrete bottling plant built next to the springhouse. The plant contained a power-driven pump, compression tank, soaker tank, and a steam boiler connected to sterilizing and rinsing equipment. Pat Crispin is the only known employee discovered so far.

Parker had his product, “Rock Spring Water”, analyzed by the Illinois State Water Survey for mineral content and sanitary quality. Parker proclaimed it was equal or better than any other bottled water sold in Decatur. He stood by his product with his own personal and long-established business reputation. He even stated in his advertisements that the bottling plant was open for inspection by the local board of health, physicians and local citizens at all times.

“Rock Spring Water” was available from local stores starting sometime around 1915 or 1916. It was sold in a 5-gallon crated bottle for $1.25 with a 75 cent rebate when the case and bottle were returned. It was also sold in a case of 6 half-gallon bottles for $1.60 with a $1.10 rebate when the case and bottles were returned. Sadly, the company lasted only a short time after Parker’s death in 1916.

The Bottling Plant and Springhouse Today

Visitors ask about the quality of the spring’s water today. Charles Parker had the water tested by the Illinois State Water Survey in 1915 before bottling it. The analysis was compared to a 1990 analysis also done by the ISWS. The report stated that “the mineral contents of the analyses are approximately the same”. This spring still flows even though it is enclosed by the springhouse.

Artifacts from this business have survived including a bottle crate and half gallon bottle owned by the conservation district. Artists have also made it the subject of their work. There are 3 known paintings of it. Two were created in 1970 by local artist, L. Rice, with one on display in the offices of the Rock Springs Nature Center and the other still owned by the artist’s daughter. A third painting by a different artist is now in Texas.